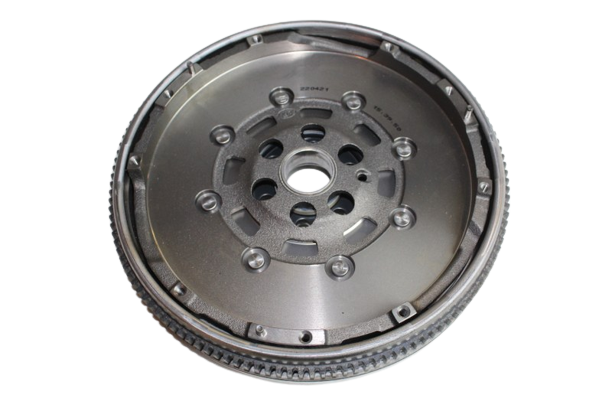 A Dual-mass flywheel, also referred to as DMF, is a unique kind of flywheel which has been used on various pickup trucks and passenger cars since the late 1980s. In this article, we are going to have an in-depth look at dual mass flywheels as well as discuss the signs and symptoms you need to look out for prior to complete failure of this important car component. Interestingly, your driving style also plays a part in the life span of this component, so read on to see what you should and shouldn’t be doing so you can extend the life of your car parts!

Firstly, What Is A Dual-mass Flywheel?

A dual-mass flywheel is a component of your manual vehicle's transmission system. This two-piece assembly consists of two separate flywheels, a front primary flywheel and a rear secondary flywheel, that are attached by a series of coil springs which are mounted sideways between the two masses.

The primary flywheel bolts directly to the crankshaft (the same as an ordinary solid flywheel) and the secondary flywheel is bolted to the clutch, providing the friction surface for the clutch to make contact with. So in the most basic terms, a dual mass flywheel is essentially two flywheels in one, attached together with springs.

What Does A Dual-mass Flywheel Do?

It is quite normal for your car engine to vibrate whilst driving. The movement of pistons, rotation of the crankshaft, transmission gears, and other moving components inside the car engine will cause slight vibrations. A DMF is specifically designed to absorb and dampen engine vibrations, protect the drivetrain and chassis and prevent torque spikes from reaching the gearbox.

Engine vibrations can cause damage to the vehicle’s engine over time and reduce its overall efficiency, so by absorbing these vibrations, dual-mass flywheels play an important role in the overall performance of your vehicle.

It is the springs between the two flywheels that provide the cushioning to dampen torsional engine vibrations and shock loading when the clutch is engaged. These springs compress and release, allowing just enough movement between the flywheels to absorb and dampen the engine vibrations, cushioning the vibrations through the drivetrain when the clutch is engaged, and smoothing clutch engagement in vehicles with high torque output engines.

This makes for smoother gear changing, reduced drivetrain noise, and longer gear life, and altogether provides a smoother, quieter ride for the driver and passengers.

When the dual mass flywheel fails, it can cause several complications and problems with your car, least of all a very uncomfortable ride. These are the most common symptoms that should  alert you to the start of dual-mass flywheel failure:

The Most Common Symptoms Of Dual-mass Flywheel Failure

What Are The Major Reasons A Dual-mass Flywheel Fails Or Fails Prematurely?

There are several reasons a dual-mass flywheel can fail, but the most common causes are:

Should You Drive With Dual-mass Flywheel Problems?

No, it is not recommended you drive if you are experiencing problems with the dual-mass flywheel as it could be potentially hazardous. Furthermore, it will not only make driving uncomfortable, but it will cause damage to your vehicle and put too much stress on the clutch. We would recommend taking your vehicle to a mechanic as soon as possible.

Dual-Mass Flywheels are fitted to vehicles and trucks with manual gearboxes. They are often used in high-performance engines, diesel and high-torque petrol engines.

What Is The Average Lifespan Of Dual-mass Flywheels?

The average lifespan of a dual-mass flywheel is around 80,000 - 100 000 miles. However, this does vary - a lot depends on your driving style, the quality of the part itself and how well you take care of it. If you ride the clutch or shift gears too harshly, you may shorten the lifespan of your flywheel and some DMFs could go bad in as little as 20,000 miles.

Is It Necessary To Change The Clutch With The Dual Mass Flywheel?

If you are replacing your dual-mass flywheel, it is a good idea to replace it together with the clutch as both components are prone to wear out around the same time. Moreover, the clutch disc is designed to work with a specific type of flywheel so using a different clutch disc can potentially cause problems such as premature wear or poor performance.

The good news is that you can find high-quality brand new Dual–Mass Flywheels and all Clutch  Parts at AfricaBoyz Online at extremely affordable prices! Their online car parts shop offers incredible savings on all car parts for all brands of cars! No doubt they can save you some money and certainly some time, with their ultra-fast courier service!

They have an outstanding reputation in the industry - have a look at some of the reviews on Google and Hello Peter - and then visit their website for the best online car part deals:  www.africaboyzonline.com!